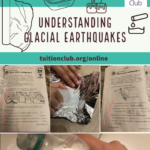 Our age 8-9 homeschooled children have been investigating the causes of earthquakes during their recent science sessions.

Some of the most spectacular features on our planet from the Himalaya Mountains to the Pacific and Atlantic oceans have been created in association with earthquakes.

Earthquakes are caused by motions in the Earth’s plates. While earthquakes can be destructive, they are also an expression of the dynamic forces within Earth that shape the planet on which we live.

The children were given a hands-on activity to complete at home.

This involved investigating the effect of glacial movement on landforms.

The children used sandy ice cubes as a model of a glacier which had pieces of rock in its ice.

Once they completed the activity, they recorded the results and gave a description of what they discovered.