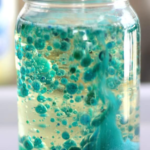 Written by Admin on 11th December 2020. Posted in News

You know the mesmerizing feel of watching a lava lamp, with its large coloured bubbles sinking, rising, and morphing? This has been a fun science experiment this week for our students age 9-10 who made their own temporary DIY lava lamp using just household materials!

A lava lamp works because of two different scientific principles, density and polarity.

If you measure an equal volume of oil and water, you’ll find that the water is heavier than the same amount of oil. This is because water molecules are packed more tightly; a cup of water actually has more mass than a cup of oil. Because water is denser than oil, it will sink to the bottom when the two are put in the same container.

Water molecules are “polar” because they have a lopsided electrical charge that attracts other atoms. The end of the molecule with the two hydrogen atoms is positively charged. The other end, with the oxygen, is negatively charged.

Oil molecules, however, are non-polar— they don’t have a positive or negative charge, so they are not attracted to the water molecules at all. This is why oil and water don’t mix!