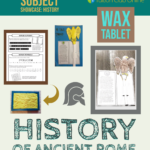 In History, the children have been learning all about the Romans.

This was a wooden board covered with a thin layer of beeswax.

The letters were scratched onto the wax surface with a sharp stick called a stylus.

The letters were rubbed out by smoothing them over with the round end of the stylus, leaving the tablet fresh and ready to use again and again.

The students have also been learning about Roman Eagle Standards. Standards were tall poles topped with various emblems and symbols which were used in battle.

The students have had a lot of fun creating their own wax tablet to practice writing the Roman alphabet and numerals.