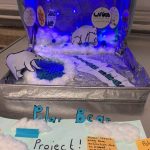 Year6 &7 Project Based Learning About The Habitats of Polar Bears

In Science, Our students in year 6 and 7 have now completed their 4-week project learning all about habitats of Polar Bears. They have been learning that homes for polar bears is on the sea ice, where they hunt seals at open leads. The bears are found in five nations across the Arctic in the U.S. The sea ice is vast and ever-changing. Because of this a polar bear’s home range can be enormous—far greater than any other species of bear. The size of a polar bear’s range depends on two main factors: the quality of the sea ice and the availability of their seal prey. Some sea ice lies over productive hunting areas, and some ice regions will melt sooner than others in a warming Arctic. Students have been introduced to the effects of Global Warming .

Students undestand that the Arctic weather can be fiercely cold. As humans, we need protective clothing and/or shelter to stay warm. Polar bears don’t, their bodies thrive in the stark temperatures. Students then went on to create models and posters all about facts of Polar bear and their adaptations due to the climate change. 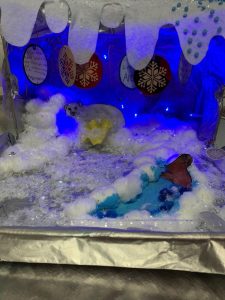 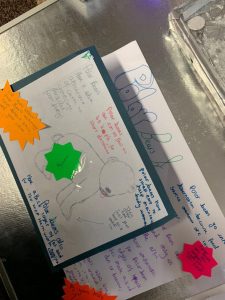 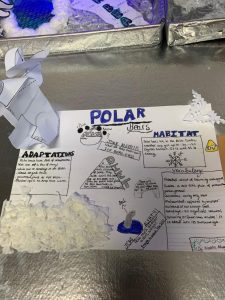