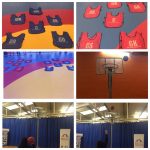 Written by Admin on 18th October 2019. Posted in News, Sports

The children have been focusing on basic skills of netball through regular and consistent training over the last few weeks.

There are netball drills for every aspect of the game, from shooting to conditioning, to help develop those skills.

To help players learn the different positions on the court they have been looking at techniques in changing speed and direction.

To do this they have them run to the position and call out its name before they get there.

This can be done with the different areas of the court as well.

Players were lined up in two parallel lines at the baseline.

Tutors would call out movements and a member from each team would perform that movement up and down the court and then back into line.

This fun game was a great warm up and refresher drill.