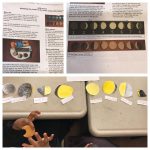 Written by Admin on 19th March 2019. Posted in News, Science

Some of our home-schooled students have been looking at the topic: The sun, moon, and stars during Science lessons.

The children reviewed what they have learned previously and then focused on the area about phases of the moon.

Students got to learn that the moon doesn’t actually change shape—it just appears to change as it orbits Earth.

The children also completed a matching activity which asked them to draw a line to match each moon phase with the sentence that tells them about it.