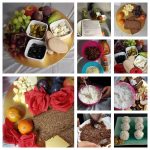 Written by Admin on 5th October 2018. Posted in News

One of the recipes they looked at was the Roman Tiger Nut sweets, an alternative to modern sweets. This recipe is one of the oldest recipes known and was found written on a piece of clay!

The other foods they looked at was from the Anglo-Saxons time period who commonly served bread with butter, new cheese or a spread. This cheese spread (Cyse Syfling) is flavoured with rose water, which was thought to aid digestion.

This activity allowed the children to imagine and discuss what it was like to eat these types of food and compare them to the modern time period.