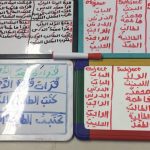 Students learn how to structure verb sentences in Arabic!

Written by Tuition Club Online on 21st May 2018. Posted in News

This week, in Arabic, our homeschooled students have been learning all about verb sentences, how to write them and what makes a sentence a verb sentence.

Secondly, students learnt the attached pronouns for both masculine and feminine subjects. The verbs they were given included يفتح (to open), يقرأ (to read), يكتب (to write) and يشرب (to drink).

Once students had fully understood these two important concepts, they then conjugated the verb into past and present tenses for masculine and feminine subjects once again and then finally used their newly-acquired knowledge to construct their very own verb sentence.