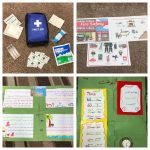 Last week our home-schooled pupils took part in several educational workshops. Some of which we felt were vital to address and to help raise awareness in these areas.

During this workshop students took part in an introduction to first aid to develop skills in this area so that they would be better prepared and more confident in situations that may require first aid.

Pupils were shown the contents of a first aid kit and discussed what the items were used for. We then went on to share experiences of first aid situations which included a Q&A session.

The children went on to practice the steps of the Recovery Position. Areas such as making an emergency call, choking, burns, nose bleed/bleeding were addressed through discussion as well as using videos.

Key important information was shared and taught so that the students were aware of the correct methods in situations that may require first aid.

Our session ended with a Recovery Position role-play which put into practice what the children had learnt.

Staff focused on educating children about fire safety and knowledge of fire prevention and escape.

Children were introduced to the basic concepts of fire/fire spread and the consequences of fire. This included the rules of fire safety and what to do in the case of a fire emergency as well as key vocabulary linked to this area and the fire drill steps.

One of the important rules demonstrated was the Stop, Drop and Roll method. Pupils took part in some role-play to practice the procedure.

They then went on to complete a worksheet about items that can cause a fire as well as a fire safety word search.

Other workshops included the Arts & Crafts and Arabic Activities where children created some beautiful pieces of work and learnt about attached and detached pronouns- a fundamental aspect of the Arabic language. Children also had a lot of fun learning about ‘Going to the Seaside’ ‘Time’ and ‘Fractions’ in Arabic.