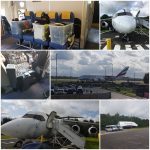 A fantastic tour, full of interesting facts and information!

On Tuesday 12th September some of our home schooled students had a fantastic educational tour at Manchester Airport Runway Visitor Park alhamdulillah. Students and tutors were greeted by a tour guide, who informed them of many interesting facts as they explored a range of aeroplanes.

Students got to see the fastest aeroplane in the World the ‘Concord’ and learnt some very interesting facts about it including, that it travels 1350 miles per hour and travels twice the speed of  sound. They also learnt that the Concord has small windows, so that they do not break when the aeroplane heats up and expands.

Students also had the opportunity to witness the landing of the largest plane in the world the ‘Emirates A380’.

The tour was then followed by a role play session inside of an old Monarch airline aeroplane, in which they learnt about the various job roles at the airport and got to try on the uniforms.

A fantastic trip was had by all and we would like to thank all those involved.