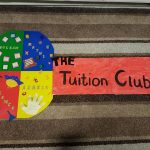 A fun time had by all at the Big Activity Afternoon!

Alhamdulillaah yesterday was the end of the first half of the Spring term, and it ended in style with a Big Activity Afternoon! Our home schooled students on the women’s section of the club took part in our end of half term competition, in which they had to make a display from the resources and materials they were provided with.

The display had to be based on something they had learnt at The Tuition Club, and the students had to work as a team to come up with an original and creative idea with the help of a tutor.

The management selected three winning teams. We would like to say a special well done to our winning class 5-6 for their display based on The Tuition Club Bake Off 2016, class 8 -10 (Group 2) for their laptop model based on their computing lessons learning Scratch and class 12-14 for their model of a medieval village.

Other displays included a replica of the Tuition Club logo inspired by the club, a felt book showcasing numbers, shapes and hand prints, a rainbow display showcasing the ‘naughty Arabic letters’ and a poster of the solar system.

Maa shaa Allaah we were really impressed by the displays and the creativity that was shown by all. We would like to say a big well done to each and every student that took part; all of the displays were excellent.

Whilst on the men’s section of the club, they took part in an engineering project. The challenge was to build the tallest tower that was able to balance a book. The students worked in teams using only straws and blu tack, and had great fun competing in the challenge.

At home time our home schooling parents were invited to join us at our winners ceremony, in which students had the opportunity to showcase their work to their parents.

A lovely afternoon was had by all, and we look forward to our students returning on the Monday 27th February at 10am in shaa Allaah.