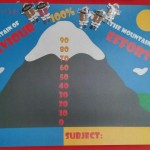 This term has seen the introduction of our new mountain reward charts alhamdulillaah. The reward system at the Tuition Club is based on using a positive rewards based approach, wherein the removal of a reward is the disciplining element.

The design of the chart includes an image of a mountain, in which character name cards are placed next to the relevant percentage. Part of the mountain represents a child’s behaviour, whilst another part represents a child’s effort. All students start off at 100% for both behaviour and effort, and will stay there unless they misbehave or showcase a lack of effort in class.

At the end of each lesson teachers record each student’s percentage mark in a reward register. At the end of each full term children with 100% in all subjects will have it count towards their grades on their report cards, and will receive a certificate and a prize for behaviour and effort in a celebration ceremony.